The Deep Dive segment of Animation Discourse is meant to explore popular cartoons, anime, and animated film to ultimately determine what makes for excellent animated works.

Stretch Armstrong and the Flex Fighters is a Netflix Original series produced in part by Hasbro Studios. It was released in October of 2017, and has received mixed, but positive-skewed, reviews since.

As mentioned in a previous article: “Stretch Armstrong and the Flex Fighters is reminiscent of a combination of both Spectacular Spiderman and Ben 10: Alien Force. The series is actually produced and directed by Victor Cook who worked on the former project, and it definitely shows in both its art style and dialogue points.” In the present-day animation market, which uses Marvel’s Spiderman as its keystone superhero series, Stretch Armstrong offers a much stronger alternative. Although living up to the accredited titles of Spectacular Spiderman and Avengers: Earth’s Mightiest Heroes’ is becoming and increasingly distant dream, Stretch Armstrong walks the fine line of having excellent dialogue and exuding overwhelming charm, along with catering to traditionally younger audiences—in other words, it acts as an solid contender relative to what is currently on air.

What makes Stretch Armstrong and the Flex Fighters an enjoyable series? The characters of Stretch Armstrong are both down to earth and likable. They truly feel like dynamic people, as opposed to walking stereotypes (with the exception of Ricardo who is still presented as quite one-sided). Both Nathan and Jake are full of insecurities, which seem to vanish once they step into their superhero personas. The confidence that they gain while keeping their city safe is realistically shown to influence each character in their day-to-day lives—in that they are more willing to take social risks given they willingly put their own lives in danger for their city whenever needed. The trio’s team dynamic works extremely well in that Nathan and Jake have been friends for an extended period of time due to their clear similarities, while Ricardo is forced into the group due to school circumstances, and correspondingly influences their routine. They each have unique traits that are more than enough to differentiate these characters from one another, utilizing a wide range of personality traits that audiences can relate to on, at least, some level. Secondary characters have also been explored enough to stand out as having dynamic personalities. And although the main characters are male, the secondary female characters (who are hinted to play a much larger role in the second batch of episodes) are not problematic in the slightest; they are shown to be dynamic, intelligent, and capable. And to add to diverse characterization, the main trio is also very culturally different, and which extends to the way each of their home lives are presented—an element that is surprisingly uncommon in children’s animation. Both the primary and secondary characters have familial issues that range from absent parents to being constantly compared to older and younger siblings. By showcasing these personal struggles alongside heroic conflict, the protagonists have to carry plenty on their shoulders. This is not only relatable within the context of struggling to balance various obligations, but also allows we as a the audience to witness the interplay between the personal and professional aspects of their lives—because no matter how much they try to keep these elements separate, they inevitably bleed into one another.

Stretch Armstrong is a lighthearted series that carries the essence of child-targeted, but the elements of all-ages. In other words, it incorporates high stakes with an intensity that doesn’t necessarily translate to the audience fully, but just enough for viewers to stay invested in its plot. A combination of being interesting but not too serious leads to a tone that fosters high re-watch value. Bright colours also add to its lighthearted tone by making it a visually fun watch. 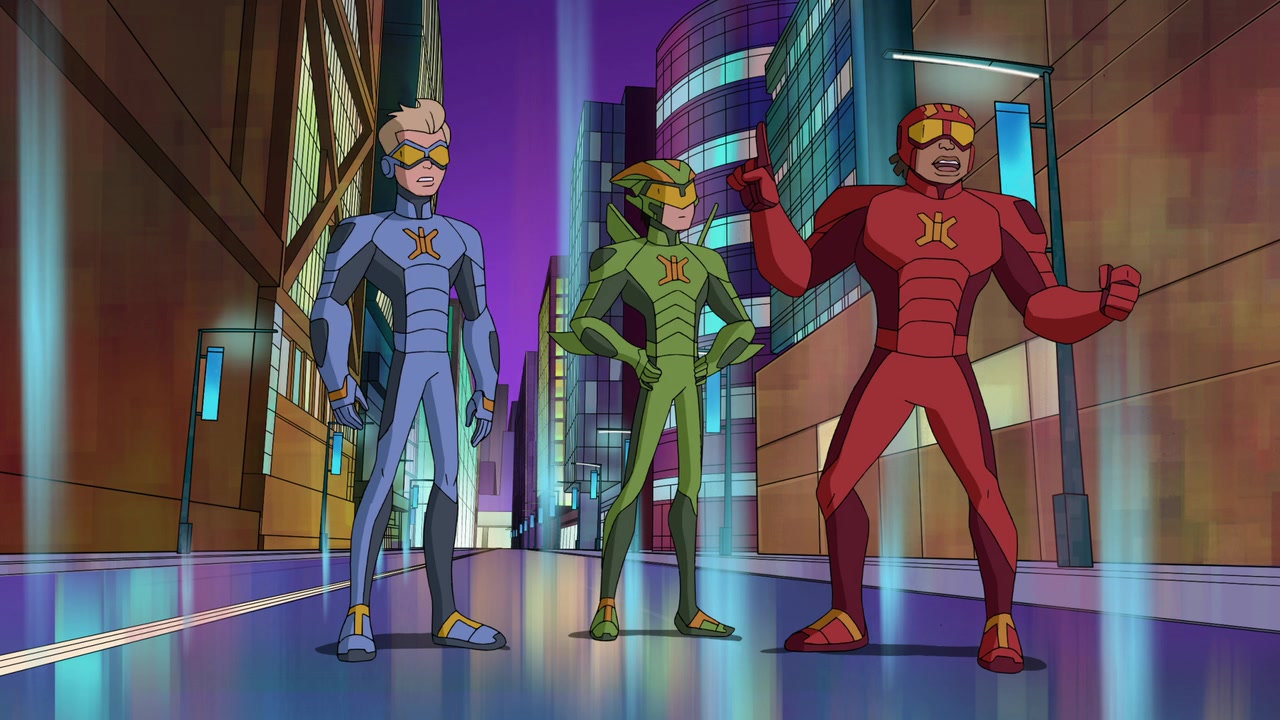 Characters of Stretch Armstrong and the Flex Fighters are presented as realistic and relatable in part due to their dialogue. Not only is there plenty of wit in their conversations, but they also speak among each other very realistically. Nathan in particular is the most relatabe character in the way that he is written. He says whatever is on his mind, no matter how rash or off-topic it may be given the circumstance—a common way of speaking with close friends in actuality. He isn’t afraid to admit his flaws or insecurities, and corresponding to this, is able to see and vocalize his own strong points as well. Aside from some awkward taunting puns while in superhero form, which is hallmark to the superhero genre, the Flex Fighters exercise a solid amount of amusing self-awareness. Teasing one another, along with superhero stereotypes as a whole, keeps the characters’ dialogue comedic and witty.

Which areas does Stretch Armstrong and the Flex Fighters lack in? The premise of Stretch Armstrong and the Flex Fighters is quite childish when broken down—a group of teenagers stumble upon toxic chemicals that grant them elasticity-themed powers. Not only do our heroes receive their powers in the most trope-complying way, but the element of elasticity that connects their powers as a trio is ridiculous at best. The concept of their city being overseen by a powerful technology corporation, head by its charismatic and intelligent CEO, is a huge stereotype (i.e. Lex Luther of Justice League & Young Justice, Abraham Kane of Motorcity, Vlad Plasmius of Danny Phantom). The characters’ personalities and weekly villains’ interesting designs are enough to differentiate the series from others with a similar premise, but not necessarily enough to define it as anything groundbreaking or unique.

Stretch Armstrong and the Flex Fighters holds up a subpar comparison to its cousin Spectacular Spiderman‘s plot (but in all fairness, many superhero series don’t hold a candle to this title). Episode one of Stretch Armstrong is full of exposition that is presented in anyway but subtle. When Jake gives Ricardo a tour around their school in the first episode, the series’ writers use this as an opportunity to glorify the facility full of unique and trope-defying student cliques. This presents Ricardo as a mere storytelling device to explain the series’ context to the audience.

The plot isn’t something that older audiences can be deeply encapsulated by straight away, but its story is intriguing enough to hold attention a few episodes in. It is a series that can be played in the background without missing too much of the substantial narrative. Stretch Armstrong attempts to integrate plot twists in order to keep audiences interested; one of which is pretty obvious, and the other not being as groundbreaking as it was conceived to be; however the attempt to add intensity to the plot does not go unnoticed.

The plot of the first 13 episodes tell a somewhat linear story, which is not very common in the current episodic animation environment. The biggest strength of the series’ plot is the amount of effort and charm that is evident throughout the majority of episodes. The creative team behind Stretch Armstrong are clearly doing their best to create an engaging narrative, given their requirement to comply with traditional marketability as Hasbro ultimately has stake in merchandise tie-ins.

Stretch Armstrong and the Flex Fighters’ largest drawbacks are due in large part to the series’ focus on marketability. It follows a specific, seemingly researched, formula that gives the three protagonists distinct colours and personality traits that translates well into merchandising. Additionally, placing one member of the trio on a pedestal, in this case Jake Armstrong, as the leader of the group is another common move done in heavily merchandised series—it’s much easier to focus on a central character as the face of the series on promotional material. And it’s no surprise that the head of the series is the only Caucasian character of the group. Unlike another superhero series that is commonly covered on this blog, Miraculous Ladybug, Stretch Armstrong tries to hide the fact that its entire conception is based on the foundation of merchandising. This approach makes the series a lot weaker, as it tends to undermine the viewers’ level of awareness to capitalistic intentions. 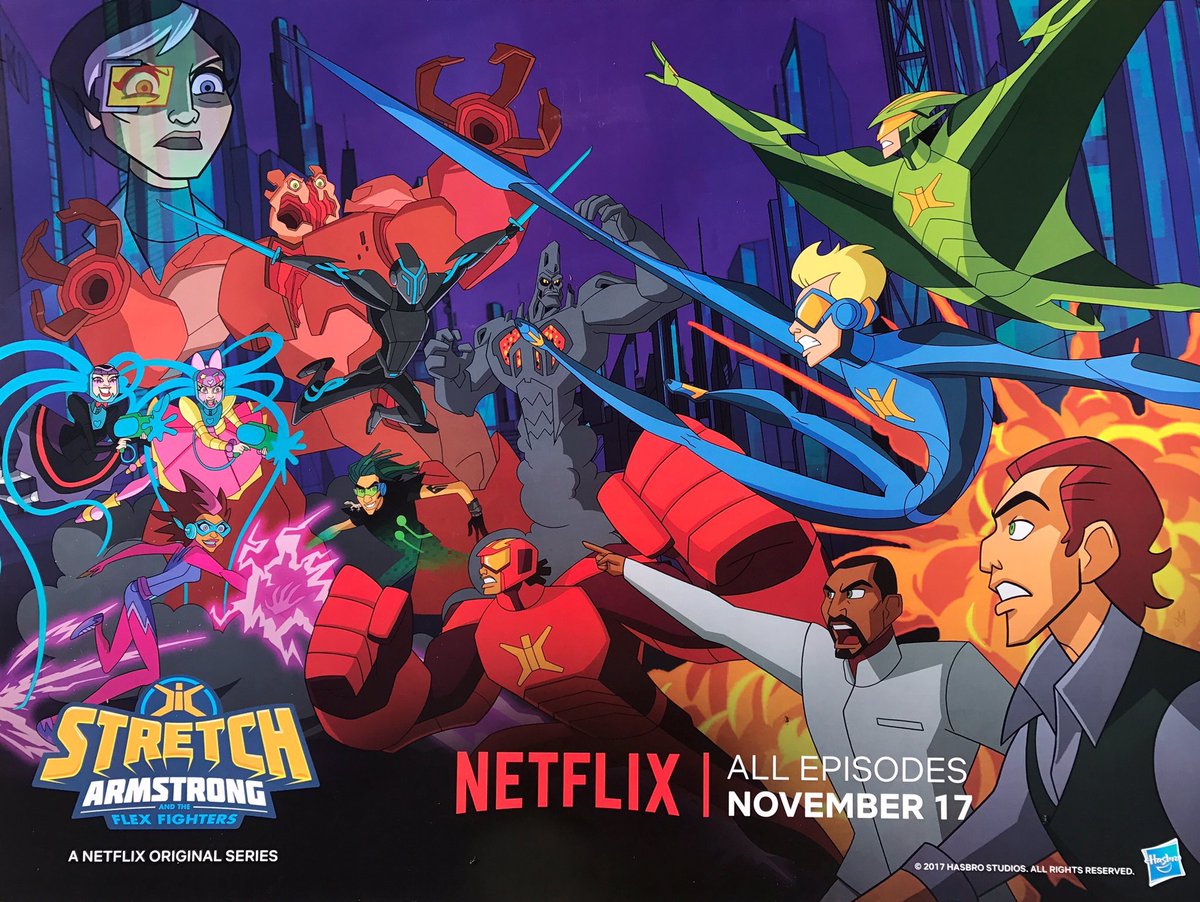 Overall, Stretch Armstrong and the Flex Fighters is an entertaining series within the sphere of titles clearly designed to target an 8 to 12-year old male demographic. I recommend the series to anyone that is looking for something with more substance than Marvel’s Spiderman as its charm, characters, and dialogue is much better in quality and makes up for the series’ areas of improvement.

Love Triangle Done Right – Star Vs. The Forces of Evil