Back in August 2017, I published a first-impression review of the Canadian animated series Mysticons. At the time, I had some critiques that still stand to this day; however, I have come to realize that I vastly underestimated the quality and potential of the series.

Produced by Nelvana and Corus Entertainment—two Canadian production companies specializing in children’s programming, specifically animation—has created a series that could potentially become a hit in this day and age online cartoon fandoms. The show surrounds a group of four teenagers, Arkayna, Piper, Emerald, and Zarya, who are brought together through a acquisition quest of the “Dragon disk”, an ancient artifact that is held in the royal ranks of Drake City. This artifact has caught the eye of evil perpetrators who would like to use it’s power to revive a previous overlord. The four girls are unexpectedly granted powers from the disk and are bestowed the unsolicited role of protecting their home from evil beings. 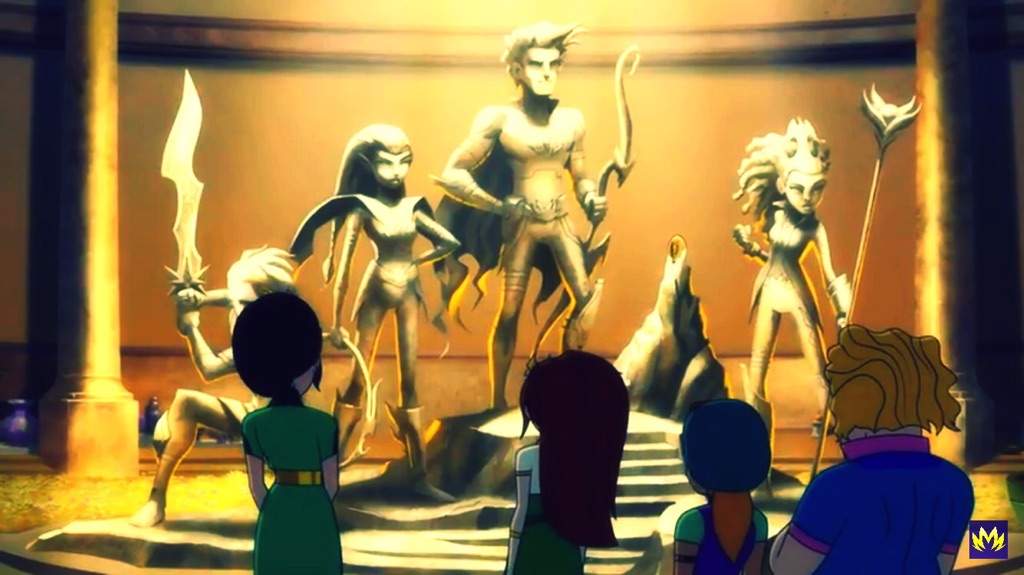 To this date, 26 episodes of Mysticons have been broadcasted and I can confidently say that it is a hidden gem in the world of modern-day animation, and amidst the top animated series to come out of Canada. Yes, there are some cliché moments sprinkled throughout its narrative, but these are largely forgiven due to the sheer charm that the characters, premise, and story emit. In the overcrowded world of entertainment media, originality is becoming a scarcity; thus, a long-winded and child-targeted series is bound to incorporate a few tropes. What sets Mysticons apart however, is how it approaches cliché characterizations and plot points, in that it does an excellent job to provide a fresh take on tired old ideas.

In my previous, admittedly uninformed, review of the series, I praised its unique premise and vast scope. This opinion still stands, possibly even stronger than it did before. It has been a long time since an Americanized animated series has showcased such ambitious prospects for world-building starting from its very first episode. Based on the first minute of watching episode one, the audience is thrown into a world that combines futuristic, fantasy, and modern-day urban elements, in a space occupied by beings ranging from anthropomorphic cats to pint-sized pixies, to regular humans. A quarter into the episode introduces the audience to strong social divides within the central setting of Drake City, featuring an underground community beneath the metropolis full of inner-city occupants.

Comparisons are presented between the “Undercity” environment, home of Piper and Zarya, to the introduction of Emerald and Princess Arkayna who reside in a grand palace as they are tied to the royal family. Showcasing diverse living arrangements within child-targeted animation is a rarity at best, so embracing the mere concept of a city with social divide shows its audience that Mysticons is serious about expanding the scope of its world while even drawing parallels to modern-day social alienation. Additionally, a current plot twist will most likely foster conflict rooted in clashed upbringings of the core Mysticons team.

The series centers 4 female leads. This in combination with being set in magical world might lead some to believe that Mysticons merely promotes a feign sense of “girl-power”, that actually feeds into long-lived stereotypes of young female behaviour centering topics of fashion and boys (e.g. Winx Club); however, this is far from the case. The series is heavily action and plot oriented, features that are especially absent in female-led and targeted series—and a combination of elements that are absent in the slice-of-life, comedic, and episodic wave of animated content we have been receiving within the past couple of years (e.g. Ben 10 2017 , Powerpuff Girls 2016, Teen Titans GO!, Unikitty, etc.). It carries an unbiased an indiscriminate outlook towards gender roles and corresponding behaviours, in that the main characters can be easily replaced by male versions of themselves, and the writing could remain mostly unaltered without the characters and story feeling out of place.

Not only are the female characters of Mysticons treated exceptionally well by the series’ writers, but they are also well respected within the context of the series itself. The male characters that are featured do not feel the need to exert bravado over our protagonists, nor do they feel intimidated or emasculated by the Mysticons’ deep-seated power. Instead, male and female characters work alongside each other as equal partners striving to reach the shared goal of keeping Drake City safe from evil perpetrators—an element that should be inherent in children’s media, but is unfortunately uncommon within the vast scope of animated works currently available. In more recent years, there have been quite a few well-known series that embrace males and females working in unison without falling into gendered stereotypes (e.g. Star Vs. the Forces of Evil, Steven Universe, Miraculous Ladybug), but in the animated arena as a whole, the dynamic between these characters are often unbalanced and comply with problematic tropes. So on top of production companies straying away from the action genre, the fact that Mysticons falls under this category and presents forward-thinking female portrayals, fills a huge gap in the current animation environment.

The four protagonists are very likable, each with identifiable traits that result in a playful dynamic. Although Arkayna is promoted as the leader of the Mysticons, each member has their fair share of screen time and are given three-dimensional personalities to a similar degree. Although characters like Piper and Zarya can be categorized by personality type (e.g. the bubbly and peppy character vs. the tough street character) they definitely have much more going for them than their labels imply. For example, contrast to Piper’s lively personality, she deals with anxiety that roots from her fear of being abandoned as a child before meeting Zarya. Carrying this burden makes her much more complex and has the viewer questioning whether her upbeat demeanor partially disguises the anxiety she’s experiencing, both from her teammates and from herself. Em and Arkayna are also quite complex in that you cannot describe using only a few adjectives—they simply do not fit into a single box. 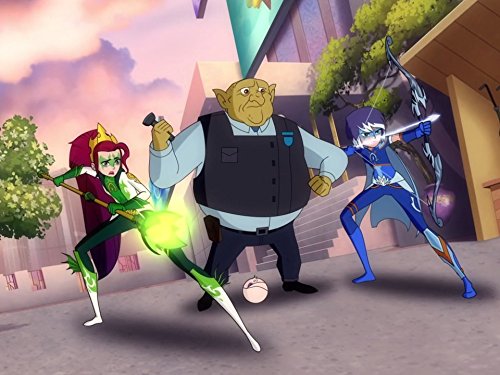 In addition to thoughtful characterization, diversity is a major theme presented in Mysticons. Not only in terms of social standing, but as mentioned previously, the series also utilizes a variety of human and inhuman races that coexist harmoniously. The series even showcases the early budding of a same-sex relationship—and not between background or one-off characters, but involving one of the main protagonists and presented in a way that isn’t glorified. This is groundbreaking in the arena of animation that so vigorously attempts to shelter children from progressively-liberal thoughts. Steven Universe openly promotes sexuality that diverts from the norm, however the characters involved are hidden under the gauze of being alien gems that are personified as humans. Star Vs. the Forces of Evil showcases same-sex couples in the background of an episode, which does wonders to normalize living in a world of diversity; however it does not have a same impact as presenting a human protagonist exploring an early romantic relationship with someone of the same gender.

Mysticons‘ level of storytelling and characterization is incredibly ambitious, making it easily one of the most plot-driven cartoon series that is currently being broadcasted. Although it has a few filler episodes near its start, as the plot progresses they become relatively scarce. As a very well-written series with plenty of charm, it’s sad to see that many animation reviewers, especially on YouTube, are brushing the series aside as something that they do not plan to watch anytime soon; however, on the other end of the spectrum, Mysticons’ YouTube channel and social media platforms are slowly but surely gaining momentum and fostering a space for discussion for young and older viewers alike. Although Mysticons has only managed to gain a cult following so far, individuals who consider themselves fans of the series seem to be incredibly invested in its narrative. On top of this, it has only began airing half a year ago, so it has plenty of time to gain further momentum.

Overall, I highly recommend Mysticons as it is a very unique series with ambitious storytelling and world-building prospects making it an entertaining watch. Mysticons has showcased to desire to expand in having ambitious social media, merchandising, and production plans; my only hope is that it is capable of staying on the air long enough to see it’s efforts come into fruition.

Canadian Animation: Will it Ever Catch Up?