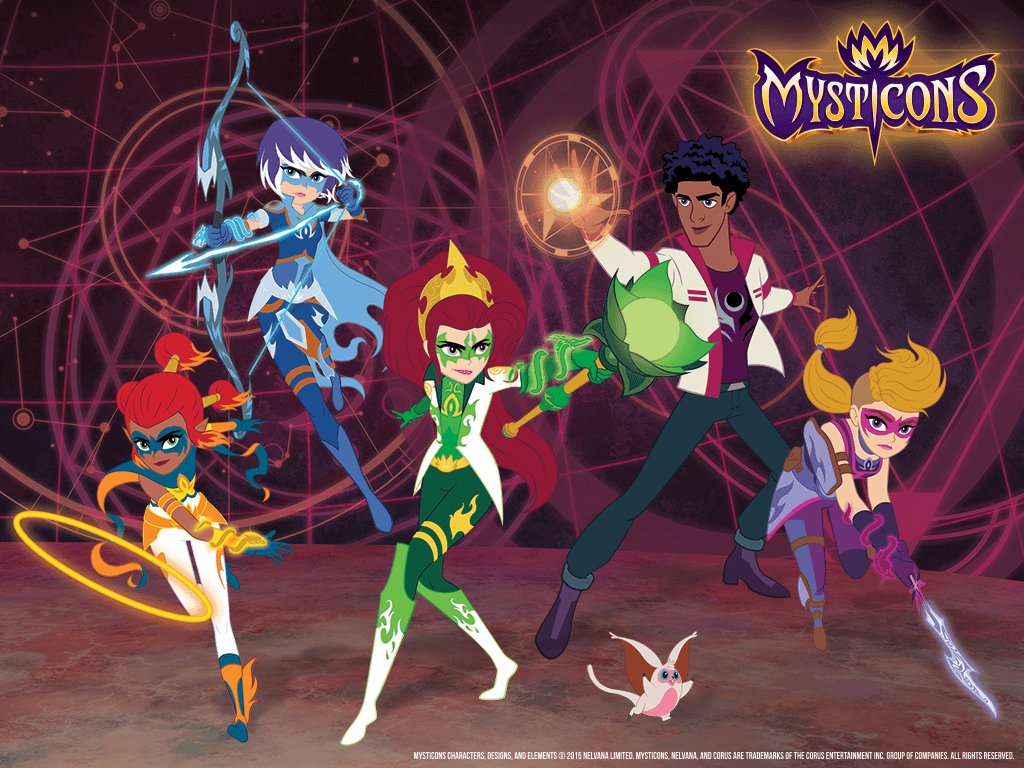 As of August 2017, Nickelodeon has added a brand new animated series to to its roster of hosted content. Mysticons emerged quietly into the television scene without much of a heads up, but has been gaining plenty of online attention as of late.

Produced by Nelvana and Corus Entertainment—two Canadian production companies specializing in children’s programming, specifically animation—has created a series that could potentially become a hit in this day and age online cartoon fandoms. The show surrounds a group of four teenagers, Arkayna, Piper, Emerald, and Zarya, who are brought together through a acquisition quest of the “Dragon disk”, an ancient artifact that is held in the royal ranks of Drake City. This artifact has caught the eye of evil perpetrators who would like to use it’s power to revive a previous overlord. The four girls are unexpectedly granted powers from the disk and are bestowed the unsolicited role of protecting their home from evil beings.

The first episode titled Sisters in Arms provides a solid foundation for the series. Its first minute in takes a dive into Drake City and many of its elements. The setting combines both futuristic and fantasy feautures, mixing hover vehicles with urban city life occupied by pixies, dwarves, and other inhumans alongside regular people. It makes for a very refreshing world with the early promise for extensive expansion.

A detail Drake City showcases that is very appealing is its display of social divides. Piper and Zarya are part of a class within the Under City—an area underneath the metropolis that is plagued by misfortune and poverty, to the point where Piper and Zarya have to risk imprisonment just to steal snacks for some of the other inner-city kids in their community. Of course in being a child-targeted series, this point was not strongly emphasized and the visualization of poverty wasn’t striking in the slightest, but including portrayals of social divides in any series targeted at young people displays a very realistic rendition of almost every region globally.

The four main protagonists share a very unique dynamic. Rather than neither of the characters, or all of them, being familiar with each other prior to their unexpected earning of the “Mysticons” title, they can be separated into two different sets: Piper and Zarya being Underdwellers and Arkayna and Emerald being part of the royal family in some capacity. This is likely to become a point of conflict throughout the season as each pair comes from a completely different background. Seeing the social divide play out in the Mysticons’ team dynamic would be very entertaining, realistic, and something that would definitely add depth to their relationship with one another upon overcoming said differences.

The character designs of the series also stands out. There is plenty of creativity in how the characters look in civilian attire versus their post-transformation appearance. Their weapons of choice are also unique to each of the four protagonists. And the details of their hair and clothing does a solid job of encapsulating each of the girls’ personalities (e.g. Piper’s eccentric and lively personality paired with her three pigtails and golden weaponry hoops upon transforming).

Mysticons’ animation is also quite different from the modern-day norm. The series uses 2D computer animation, with an attempt to resemble hand drawn animation. I’ve brought up the budgeting issues that Canadian content is often plagued by (read a previous post for more information), so for a Canadian-produced cartoon, I applaud its animation; however, in comparison to American-produced content that is currently airing, I believe that hand drawn animation would be much better suited. Although many avid animation fans would argue that hand drawn beats Flash, ToonBoom, and other computer-created 2D programs every single time, I strongly disagree with this statement. Series like Star Vs. the Forces of Evil and Gravity Falls utilize modern animation techniques really well (in combination with traditional animation at times). Mysticons, however, loses out through this class, given it’s heavy action scenes and plot-driven story, which are typically paired with traditional animation (e.g. The Legend of Korra, Voltron, Steven Universe etc.). The movements are similar to, yet much more fluid than, the Canadian cartoon series Detentionaire. So although the series can benefit from higher-quality animation, at least it is a huge step up from other Canadian works.

Overall, Sister in Arms presents a solid start to the series, laying out the premise and introducing the main characters quite well. Plenty happened during this episode making it feel surprisingly long for being only 20-minutes. My main concern with Mysticons moving forward is that it might be jumping into the plot a little bit too quickly. The pacing can become a little bit too quick to fully enjoy, or even grasp, the story. As for the dialogue, the jokes can be a hit or miss, but overall it’s clear to see that the creative team behind the series has put a lot of heart into its writing.

Finally, the theme song is very upbeat and catchy. It gives off a similar tone to that of Totally Spies, except it is an original song created specifically for the series. Additionally, another track played near the end of the episode which was also quite good. Together they provide high hopes for the remainder of the series’ soundtrack.

Although it’s too early to tell whether or not this series will become a hit, it is definitely one of the higher-quality cartoons to come out of Canada. Additionally, if the series is successful, and seeing that Playmates Toys is listed as a producer, the characters and premise of the series have amazing potential for merchandise creation.

Star Vs. the Forces of Evil: Subtle Feminism