Anime has changed the way that many people watch American animation. After being widely-introduced to US cable in 1997 through the beloved Toonami segment of Adult Swim, viewers began to expect more from animation in general. More specifically, they began to crave continuity, overarching plots, and character development. And as the 2010s approached, they began to truly see the impact that the complexity of anime has had on American works. The new decade raised young creators who grew up watching anime and who genuinely believed that American animation could follow suit in telling deep and intriguing stories.

Japanese animation is treated as an inspiration because it conquers American storytelling and visual quality on many fronts; however, as great as its storytelling typically is, anime tends to lack a specific element:

Anime, like most forms of entertainment on the small screen, thrives on countless tropes; however apart from these, there are very specific female portrayals that are displayed throughout many of Japan’s animated works. Two specific qualities that are often woven into countless female characters include:

1) submissiveness and 2) boy-craziness. Neither of which are positive nor progressive. Female characters are often portrayed as the weak alternative to their male counterparts. Many are defined by their romantic feelings towards a male character who consequently ends up bringing out the best in these girls: 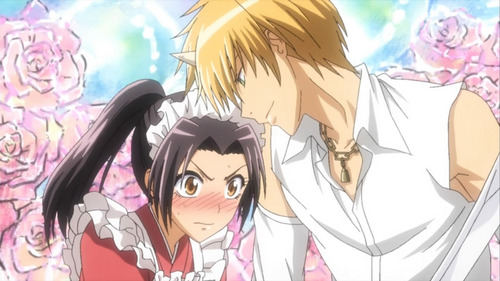 To add insult to injury, the submissive female anime character often puts up with plenty of verbal and sexual assault that is too often played off as the norm:

And to make matters worse, many female characters eventually develop romantic feelings towards their harassers. This doesn’t only make certain anime titles difficult to watch at times, but also spreads the idea that this treatment towards women is justified and even rewarded.

Not only is female submissiveness prominent in anime characters, but incorporating a boy-crazed personality into their characterization is also common. Before I continue, allow me to clarify that having romantic feelings towards another character is definitely not a negative feature. It’s a perfectly normal occurrence that the vast majority of us can relate to. The issue truly lies in the presentation of the boy-obsessed trait—it is promoted as a redeeming female quality.

Many female anime characters are defined by how they feel towards males. Many will throw away everything just to be in the same vicinity as a specific guy. And when these characters’ entire personalities become tied to how they feel towards someone else, they frequently end up subjecting themselves to the age-old cultural convention of becoming nothing but an extension of their male counterparts. Female characters that have a boy-crazed outlook are typically emotionally and socially underdeveloped, but presented as being well-rounded individuals—as if having extremely powerful romantic feelings towards a guy is more than enough to compensate for a lack of personality.

This is a huge issue as girls should be taught to build themselves up internally rather than relying on external stimuli, whether it be another person or something else entirely.

The boy-crazed characteristic isn’t only inherent in Japanese animation but, as mentioned in a previous article, is also more than prominent in American works. The only difference is that female characterization and treatment in cartoons seems to be improving at a much quicker rate than that of anime, despite many anime having more complex storytelling elements.

Although Japanese animation is saturated with less than favourable female portrayals, there are also many notable personalities out there who have built themselves up without the help of a male counterpart, and who are recognized by who they are and what they have accomplished instead of who they are romantically attached to:

And since misogyny isn’t exactly a positive note to end off on, I will leave you with this question: Who are the most trope-defying anime females on your list, and what is it about their phenomenal characterization that earns them a place on it?

Keep in mind, I am not Japanese nor have I ever visited the country. I only have a vague idea of what Japanese customs are, but cannot even begin to comprehend Japan’s social norms. However, I don’t believe that this should be used as an excuse by North American viewers to ignore these issues. Anime is becoming widely accessible on a global front. With Crunchyroll, Netflix, and other (questionably legal) streaming platforms distributing anime, viewers can access these works instantaneously, and because many of us are viewing anime, as with all of the media that we consume, it’s important to be actively critical of these works regardless of where they originate. With this said, as a Canadian I am approaching this topic from a Western perspective, as should you (though please feel free to disagree).